When a charged, rotating star collapses to form a black hole, there's always a 'point of no return'. You can imagine things like this: Everything closer than that point gets sucked into the new normality of physics in the world of 'life in a black hole', with no chance of ever escaping. Everything outside of that point has a chance of escaping capture and follows the laws of physics as we know them in everyday life.

But when a rapidly rotating star collapses to form a black hole, something strange happens: that 'point of no return' isn't a fixed, stable point in time and space. And when it is unstable, there's no guarantee that the laws of physics still hold true. Which means… very weird things can happen on a large scale. Or, put another way: we'd have the spookiness of quantum physics on a macroscopic level. So if Schödinger's cat was a real BIG cat instead of a subatomic cat, and that macroscopic cat happened to be on a space ship caught in the 'unstable zone', that cat could be in a superimposed state of being alive and dead simultaneously. Now, wouldn't that be freaky?

Our sun is too small to turn into a black hole some millions of years away. But for all those Star Trek fans who enjoy sympathizing with countless perils in fantasy worlds that push physics to its limits and beyond… well, perhaps some of those stories aren't that far from the truth after all. Or maybe God does play dice with the universe after all. 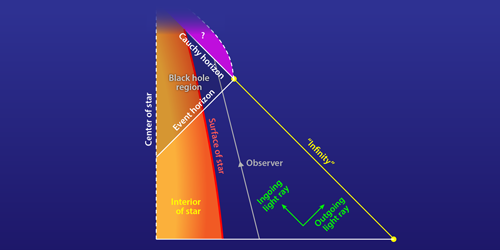 Quasinormal Modes and Strong Cosmic Censorship
A numerical analysis of perturbations of a charged black hole suggests that the usual predictability of the laws of physics can fail in general relativity.