Of course, the artificial womb isn't ready for a test-tube baby yet: under this scenario, the first stages of pregnancy, until a minimum developmental age has been reached, still takes place inside the biological mother. But it does raise a lot of interesting possibilities:
– Would it be possible to place premature babies in an artificial womb to allow their organs to fully develop properly, thus saving a lot of lives and preventing a lot of complications and agony?
– Is this the future of industrialized meat – with mother animals initiating pregnancies at shorter intervals, and their offspring set in artificial wombs to fully mature for slaughter?
– Would it be possible, one day, to put the first stages of pregnancy into an artificial womb as well, to raise a test-tube baby to birth completely externally from a biological mother?

Aside from the unnatural appearance of the artificial womb, given the high costs of premature birth (both monetary and in terms of trying to save the infant's health, which I assure you looks a lot more unnatural than an artificial womb), this is a very promising development. The other potential applications that spontaneously came to mind, though, perhaps need some serious ethical thought before continuing down the rabbit hole… 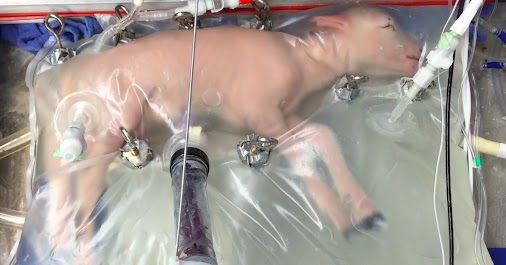 An artificial womb successfully grew baby sheep — and humans could be next
Inside what look like oversized ziplock bags strewn with tubes of blood and fluid, eight fetal lambs continued to develop — much like they would have inside their mothers. Over four weeks, their…