A few days ago, +Guy Kawasaki made an insightful post highlighting how being selfish brings more status, job promotions, and 'good' things in some countries – namely the more capitalistic ones. At the same time, it highlights how other countries – namely the more socialist ones – tend to link kindness with those same 'good' rewards of status, job promotions, etc. And this systematic reward scheme creates a system that we live in, which over time has been pushed to extremes – and as a result, many have come to passionately love or hate it. Link to Guy's post: https://plus.google.com/112374836634096795698/posts/XbqrRnJp6PF

But something interesting is happening in the digital world of interaction, where these international barriers no longer exist, and where people are free to make behavioral choices that determine their digital reputation status independent of whether or not it helps them get on with their career: even in 'selfish' countries, people begin to break away from the selfish stereotype and base decisions on kindness instead.

Here's one recent perfect example of this in practice: +Carrie Canup, who lives in what is rated as an extremely selfish country but happens to also be one of those 'kind souls' whose kindness touches people worldwide through her presence on Google+, makes a post requesting for financial help – and is overwhelmed by how her request has funded her medical needs for next year within the first 24 hours. I doubt she'd have gotten the same response if she wasn't the 'kind soul' that she is: kindness pays off and leads to reciprocacy in status, just as it does in the 'kind' countries in Guy's article. Link to Carrie's post: https://plus.google.com/u/0/114849831678812551299/posts/2pKVZMacpbA

So what are the incentives that make create status, and thus success, online? Nothing that we don't intuitively already know: being kind, being sympathetic, having a human personality, having strengths and weaknesses without hiding them, being a positive motivator, and… oh, I'll bet there are people in some of those 'kind' countries who have put effort into figuring out how to climb the ladder of career success, who may be much better positioned than anyone in the 'selfish' world to teach the art of positive influence!

And what's more: I'd expect that this shift to a world, or at least a media channel, where social aptitude and kindness are crucial in reputation building, should bring a lot more happiness into the 'selfish' world as people, and businesses, are forced to become more aware of what humanity actually means instead of cocooning away in ramping up economic success.

As we mix the two opposing directions of kindness and selfishness, I'd hope to see a new flourish of businesses that are, also, kind – not just the few token examples that you read about now and then, but every single corporation, from small to large, resulting in a more sustainable socioeconomic system, more friendly and more human relationships, and ultimately a happier world population. 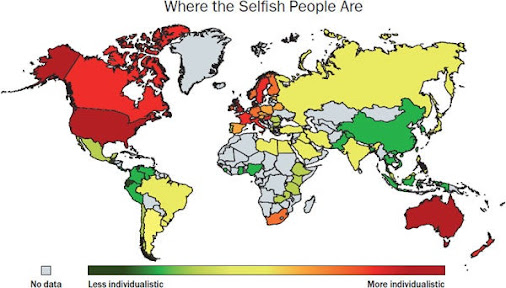 18 thoughts on “Digital relationships: A long-needed breaking down of capitalist consequences”