For those who've missed the news yesterday – this game is a superb example of good gamification. Play it a bit, and you'll have fun and be able to recall the fusion pathways afterwards.

I've been playing around with the game yesterday and have an addition mod for my son, just some finishing touches tonight and then I'll post it. But I think what would be even more valuable is to build up the subjects which are despised by many, many students… such as organic chemistry.

My first thought was to pick a few metabolic pathways and see how things go. But, probably most courses don't start with cellular metabolism. So, I'd like to humbly ask you for your opinion: 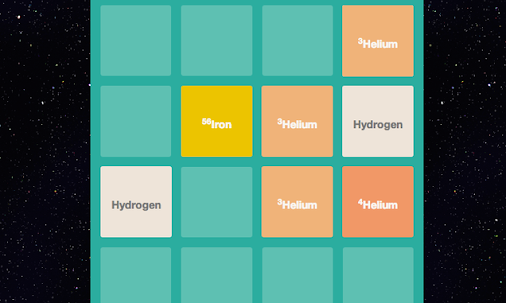 This Stellar Fusion Game is Shockingly Addictive
Stars are colossal fusion reactors, burning hydrogen into helium. As the nuclei fuse lighter elements into heavier elements, massive amounts of energy are released. A new game sets you the task of nucleosynthesis, building hydrogen into iron, and it’s surprisingly fun.

17 thoughts on “Anyone up for an organic chemistry mod?”